What we can learn from Philip Pullman’s storytelling 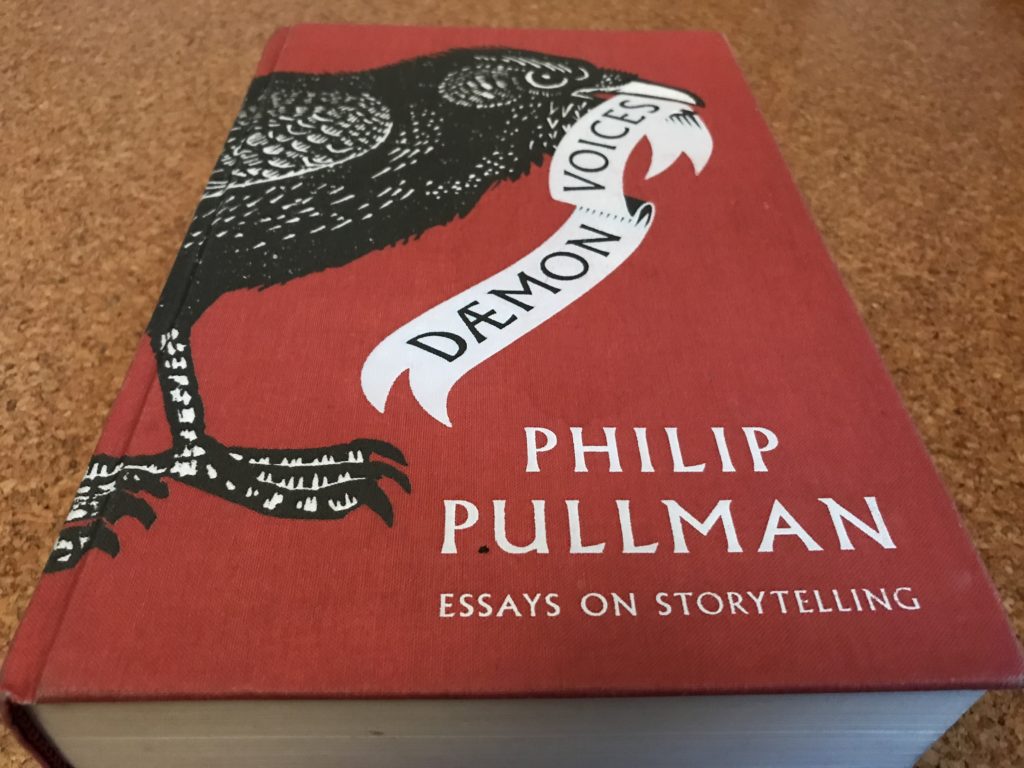 I wonder how many people ended last year and started this one as I did: re-reading Philip Pullman’s His Dark Materials trilogy on the back of the BBC dramatisation. Watching a TV or film dramatisation of a book that you read some time ago is a bit like having an itch. You can’t quite remember what’s been left out or what’s been added in or what messages you picked up from the screen version that you didn’t get first time round and it keeps bothering you until you give in and start reading the book(s) all over again.

Once I’d re-read the trilogy, I thought about starting on The Book of Dust, but decided on another of Pullman’s books instead, one I’ve been meaning to read for a while – Daemon Voices, a collection of his essays on storytelling. And it’s this book that I really want to talk about here. However, I have a quick confession to make. I’ve not actually read all of the essays yet because it’s the kind of book you read over a period of time rather than in one go, and also because I was waylaid by Milton’s Paradise Lost after reading Pullman’s essay on the epic poem.

But, as it’s national storytelling this week, I wanted to share a few thoughts on the back of what I’ve read so far.

I’m interested in what Pullman says about storytelling and fiction and how I think that relates to storytelling and journalism, content marketing and copywriting, but most particularly how it relates to storytelling and journalism. I didn’t intend to write about this when I started reading Daemon Voices, but I had only got a few sentences into the first of Pullman’s essays (a talk he gave in 2002 called Magic Carpets, The Writer’s Responsibilities) when I realised there are some correlations between being a storyteller of fiction and being a storyteller of more factual material.

How so? you ask. What are the similarities between writing fantasy stories featuring dust, other worlds, religion, science, daemons and so on and writing in the B2B space about issues such as digital transformation, leadership and employee engagement? It’s a very obvious and legitimate question to ask!

The answer – or more accurately, my answer – is that there are storytelling themes in Pullman’s essays that resonate strongly for me as a writer.

Let’s start with a lecture that Pullman gave in 2002, titled The Writing Of Stories, Making It Up and Writing It Down. Near the end of the lecture Pullman says this:

“And the way to do that, the way to tell a story, as I’ve said before, is to think of some interesting events, put them in the right order to make clear the connections between them, and recount them as clearly as you can.”

There you have it – the bare bones of how to structure a story. As a journalist, you have to sift through information and interview material, separate the wheat from the chaff, to find the interesting events. What will your audience want to know about? What do they need to know about? Why? And how do you make the connections between the different things you want to say in a way that makes sense and flows well? This ordering of events and connections can be frustrating but is also fun and the process is essential if you want your story to ‘hang’ well. Skimp on this bit and you end up with a mishmash of information and quotes and run the risk of confusing and losing your readers.

Then there’s the word ‘clear’. Writing of any form should always be (I think) clear and accessible. That’s doesn’t mean dumbing down, but that your reader can follow what is being said, without faltering on meaning or getting tangled up in complex sentences. Pullman says the aim “must always be clarity”. It’s the same with journalism, copywriting and content marketing. You want your readers to be totally clear on what is being said and why. In the Magic Carpets talk, Pullman says this about language:

“We should try always to use language to illuminate, reveal and clarify rather than obscure, mislead and conceal.”

Mislead and conceal. Hmm. No journalist should ever attempt to mislead or conceal, but of course, it does happen. I don’t want to go into the problems of misinformation, politics and partisan journalism, because they are very weighty topics and there’s not space for them in this piece, but these are big issues for the media and for the general public. Journalism should be neutral, balanced and independent and where it’s not, it should be clearly stated as opinion, and that opinion should still have an element of balance to it.

As a journalist and as a copywriter and content marketer, you have a responsibility to be truthful, to be honest and accurate. Always. You need to find and present the facts and you need to convey the right information, even when it conflicts with your overall message. Sometimes you have to write a story that is complex or ambiguous. Sometimes the stats don’t add up the way you thought they would. Sometimes your interviewee tells a different story to everyone else, prompting a big question mark over the overall story. You have to find a way through those problems and write honestly and accurately.

When Pullman talks about responsibility towards language, he says this: “Once we become conscious of the way language works, and our relationship to it, we can’t pretend to be innocent about it.”

The tenor of journalism has changed in the 20 odd years that I have been in this profession. It’s much more emotive now, less impartial and opinions are presented as facts. Change is inevitable, but you have to tread carefully here.

As any kind of writer, you have to think about the language that you use, particularly if what you are writing about is controversial or of a sensitive nature – politics, corporate wrongdoing, financial mismanagement…. Journalists should avoid stirring up emotions, particularly negative emotions such as hate or anger. Your role is to inform, educate and entertain people, not to pull them in a certain direction through emotive or biased writing. Pullman talks about the need for emotional honesty – not trying to “draw on emotional credit to which our story is not entitled”.

Journalists have to keep in mind what they are trying to say and why. What do your readers need to know, what do they need to find out, from the piece that you are writing? Why does this story need to be told? It’s the who, what, where, why, when and how of journalism. You need to cover all these bases and really think about what message and what information need to be included. Journalists who write for younger audiences have to think about responsibility a lot. Sometimes the stories they write contain distressing information or themes, so writing about them requires sensitivity and an understanding of appropriate tone and detail.

Now, there is plenty more that I could write, but the word count is mounting up so it’s time to stop. Perhaps it’s just as well that I have only got as far as I have with the essays – otherwise this piece could turn into a mini book in itself!