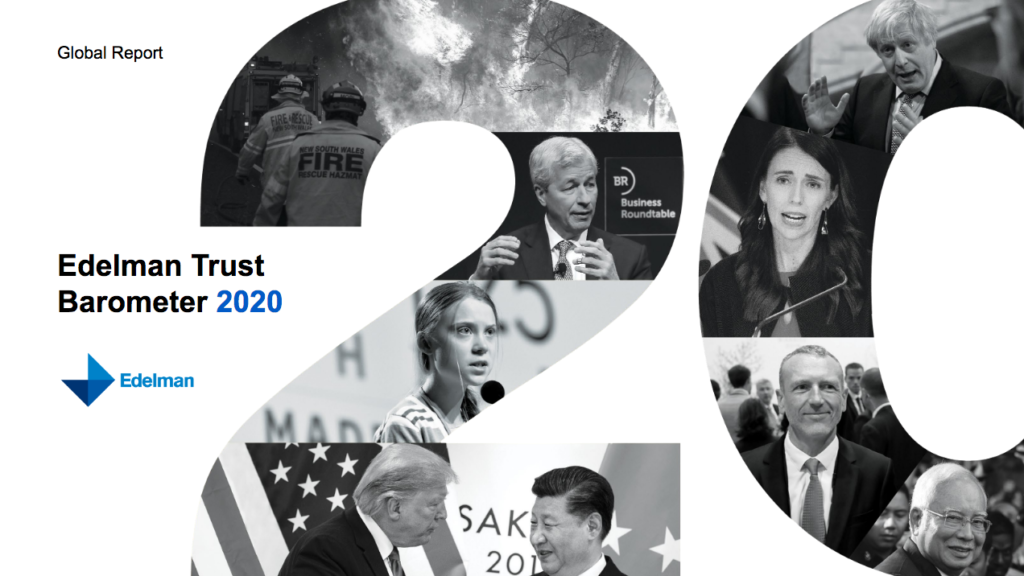 A snapshot of useful research for L&D and workplace professionals

Why read this report

The report looks at how much trust the global population has in four societal institutions – business, the government, NGOs and the media. This year’s report found that trust levels are very low. Why is trust an important issue? Because trusted organisations find it easier to win over consumers, employees, regulators, investors, the media and the marketplace at large. As Edelman says in the report, trust is essential for future success.

Edelman Intelligence, a global insight and analystics consultancy, conducted the survey online in 28 markets, between October and November last year. More than 34,000 people took part. It also includes a review of 150 plus academic articles and 80 plus models of trust. It is Edelman’s 20th annual trust survey, with this year’s heading being Trust: Competence and Ethics.

This year’s report found that there is a growing sense of inequity, with income inequality now affecting trust more than economic growth. In fact, trust inequality has set new records, with the mass population being 14 points less trusting and 23 markets reporting double-digit trust gaps.

What is fuelling this distrust? An increasing view that the system is unequal and unfair, with institutions prioritizing the interests of the few over everyone. Government scores particularly badly on trust – 57% of the general population say government serves the interest of only the few.

In order for people to have strong levels of trust in institutions, those institutions need to demonstrate two things – competence (delivering on promises) and ethical behaviour (doing the right thing and working to improve society). None of the four institutions tick both boxes, according to Edelman’s trust barometer. Government and the media are perceived as both incompetent and unethical. Business gets the highest competence rating and NGOs the highest ethical rating.

Respondents reported strong fears about the future. The vast majority (83%) say they fear losing their job because of one or more of the following causes: the gig economy, a looming recession, lack of skills, cheaper foreign competitors, immigrants working for less, automation or jobs being moved to other countries.

In developed markets, the majority of respondents do not think they will be better off in five years’ time. And over half (56%) of the respondents think capitalism in its current form is doing more harm than good in the world.

What can businesses do to restore trust, according to respondents?

Edelman has been carrying out this research into trust for two decades and for that reason it is worthy of attention. The large sample size provides insights into what people want and expect from institutions, and especially employers.  If you believe that trust is essential for the future success of your organisation then this report is for you.